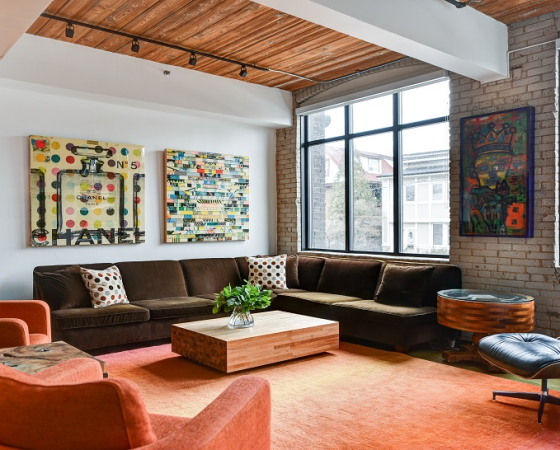 A west-end Toronto loft with a postindustrial vibe

Real estate reality TV producers moved back to Toronto from New York, but wanted to stay in a loft. A star of one of their shows found them the perfect place in a great family neighbourhood.

THE BACK STORY
Courtney Campbell and Kirk Hipkiss were living on the Upper West Side in New York when a new creative venture brought them back to Toronto in 2013.

The couple produces reality and documentary television about real estate and design for HGTV and Bravo, among other networks. Real estate addicts who have watched such titles as Selling New York, Selling L.A. and Big City Broker will know their work.

They were searching online for properties when they spotted a loft for sale at One Columbus in the west-end neighbourhood of Parkdale. Mr. Campbell and Mr. Hipkiss were familiar with the former industrial building from their days of shooting in Toronto.

At one time, a leather goods manufacturer turned out sporting goods in the red brick factory near Dundas Street West and Roncesvalles Avenue. The century-old building went through a few transformations before it was converted into 10 lofts in the 1990s.

“Coming from New York, where we lived in lofts, we were very comfortable with apartment living,” Ms. Campbell says. The couple was also accustomed to navigating large cities as they raised two young boys.

Ms. Campbell and Mr. Hipkiss were both drawn to the authenticity of the post and beam architecture, warehouse-sized windows and polished concrete floors in the four-storey building…

Originally published in the Globe & Mail on March 8, 2018 by Carolyn Ireland