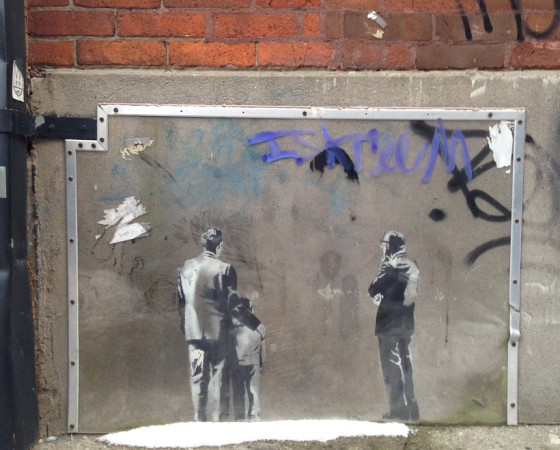 My first experience with a Banksy was back in the fall during shooting of the POPE Real Estate branding video. I was chatting with Mark Wilson, Cinematographer of Propertyfilms.ca, during location shoots in Corktown, The Distillery District and the St Lawrence Market. As we were walking along King Street East between shoots, he told me about a Banksy wall stencil not too far from where we were standing.

Like many, I was introduced to Banksy by the Academy Award nominated documentary: “Exit Through the Gift Shop.” I was a little surprised that I didn’t know that Banksy had visited Toronto and left his mark. I guess I must have been selling up a storm that year not to take notice.

Mark was good enough to show me the location. The Banksy is located on Church Street, in an alley, on the west side of the street, just north of The Esplanade. The piece depicts a man and boy standing together and a few feet away another man standing. All three appear to be witnessing a spectacle—Banksy. Thankfully the owners of the building have placed acrylic glass over it to protect it from vandals.

Afterwards, my curiosity brought me to the World Wide Web. This is where I discovered that there were other locations in Toronto where Banksy had left graffiti. Sadly most have been destroyed. However, Menkes, a condo developer, has saved the only other piece. Menkes removed part of a column with a Banksy before the building was demolished to make way for another condo, Harbour Plaza. Menkes intends to re-install the Banksy piece in a common space for all to enjoy once the condo building has been completed.

Want to know more about Banksy? Banksy in Toronto? “Exit Through the Gift Shop”? Check out the following links:

Exit Through the Gift Shop (Wiki)