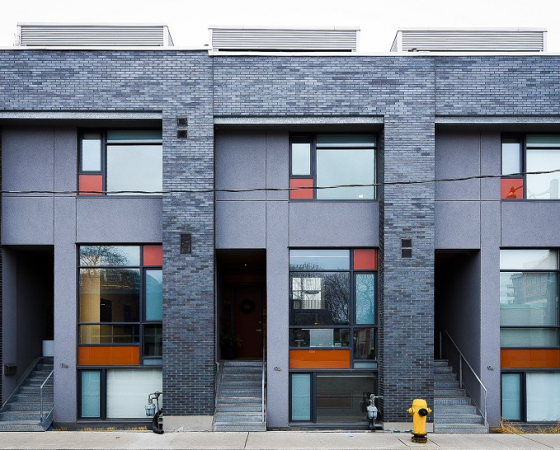 Days on the Market One

The Action: On a laneway once home to a popular Jamie Kennedy café are eight freehold townhouses with built-in garages. The layout and location of two-bedroom townhouse on a 16-by-42-foot lot discouraged couples with young kids, reducing the potential buyer pool. First listed at $1.595-million, then $1.495-million for a short time this spring, a deal was immediately signed once the property was relisted and the price cut to $1.395-million.

“It’s a neat laneway property,” said agent Robin Pope, who has sold many units in the row. “In my experience, it takes time to find a buyer for this type of property.”

What They Got: Similar to the seven other townhouses created seven years ago by architect Brian Kucharski, this one offers 1,814 square feet of living space with six rooms, each essentially located on its own half level, with nine- to 13-foot ceilings.

The interior decor is modern with a central floating staircase, a sleek gas fireplace in the living and dining area and a Scavolini kitchen with stainless-steel appliances and Caesarstone counters and island.

Three levels provide one bedroom and one bathroom, including a set in the basement. The top level has a den with a front balcony and exterior staircase to a rear terrace with a green roof, water and gas outlets.

The Agent’s Take: “Everyone customized their unit originally when they bought from the builder, and when [the second owners] bought it, they made quite a number of improvements,” Mr. Pope states.

“There are some [modern townhouses] in the east end, like in Riverside and Leslieville, with a tiny patio area, but they don’t have a rooftop. So certainly, having a rooftop terrace [here] is a nice thing. It’s very vertical living.”

Originally published in the Globe & Mail on July 20, 2017 by Sydnia Yu